I will often be the first to rant about the impossibility of defining an individual’s identity. Simplifying it to ethnicity, race, gender, religion and all that fun census stuff – does not quite cut it. The fact is that once you explore each of these further you realize that the boxes are not accommodating anymore. So then, if you are like me, you start to define yourself as a hybrid. You define yourself based on your differences to other people – even those you may have once considered within your category.

In this project, identity is a concept that we forever return to because as we `build profiles` we are in a constant process of better understanding the individual. Whether through a theatre, creative writing, drawing or spoken platform – we have tasked ourselves with probing and prompting each person to actively reflect about their identity. Not only so that they can a step back to look at themselves but also so that we can collectively agree that defining as well as recreating your identity is a continuous process. From this premise we can then begin to relook at someone’s mechanics. That is to say – if I pressed your reset button and made irrelevant the past, who would you choose to be? How might you define yourself without the external pressures and expectations of conformity and belonging. 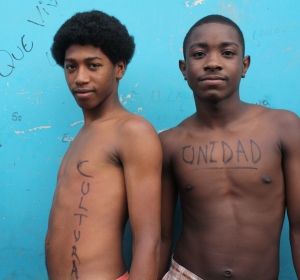 In our last days of workshop with the Isla Piedad community, we had participants fill out a cultural iceberg but apply it to themselves the individual. The way it typically works is to go from the clearest to fuzziest aspects of yourself. So we begin with the superficial – what I can gather just from looking at a person. Then move to an individual beliefs and values and lastly to the layer most profound which is the social history. Now you might have thought, as I did, that for a community of AfroEcuadorians they would at this point make note of a history of exclusionary politics and marginalization all beginning when the first shipwreck of African slaves had befallen the coast of Ecuador. On the contrary, these were not the answers we got. For the most part history went back as far back as the date of birth of that person. As they themselves have noted in the past, lack of education has always been an impediment but this I suspected already so why was I still expecting another answer? My initial line of thought was that as an oppressed ethnic group you must register a `history of discrimination` in order to explain the behaviour of other people towards you. Not quite. In relative terms, and many studies would reaffirm this, AfroEcuadorians are one of the most marginalized groups in the country still very exposed to discrimination. Yet, because they are in large part found in the province of Esmeraldas they end up occupying a world of their own. In this world the culture is vivacious, the houses bright, the food the best in the country and the acceptance of Afrodescendents throughout. Even though their province’s development is less, they live in an insulated society removed from the day to day of racism. That is not to say that the discrimination does not reach them because it does – in the form of less infrastructure, little commercial development, no jobs, low access to credit. However the street racism is less pronounced and so the air easier to breath. Especially if you live in the Sector of Isla Piedad – there is bound to be a lot more on your mind than how the social acceptance of AfroEcudadorian people has progressed. So not everyone spoke of the historically documented social discrimination of Afros but instead of the development of their community. In their world the discrimination occurs at a much more local level where despite being two blocks away from the city center they could not be any further apart. Rather than racial discrimination they are often considered degenerates, thieves, gang members – we are often warned against working in the community and even taxis won´t drive us in.

The point is that their identity is just as difficult to decipher as the person whose never lived in one place. They were just as much as hybrid as I considered myself. That I assumed to get a certain kind of answer about their social history proved that I was still only considering them at a superficial level. They are no where close to the stereotypes others in the community have labelled them with but in fact far more complex.