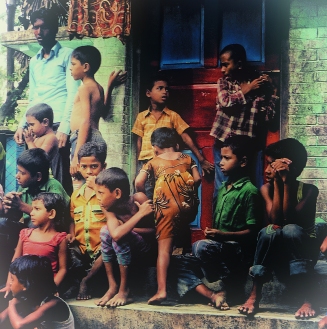 “Even as I cling on to my jut-made UN Population Fund Bangladesh bag, their slogan “Because Everyone Counts” offers little reassurance.”

Here’s the deal. We’re a 7 billion people world today. But what does that actually mean? Living in North America you might not know it – the changes so incremental that you would have not even taken notice. Here in Bangladesh however – you know.

You know because it feels like a 7 billion people world. I’m not just talking about more heads per square meter than any other country in the world. It’s the effect of all those people. The more than you can count carbon emitting tuk tuks, uncoordinated rick shaws and beggars that fill the streets of Dhaka and Chittagong, Bangladesh’s cities, are only tell-tale signs of a population crisis. Even as I cling on to my jut-made UN Population Fund Bangladesh bag, their slogan “Because Everyone Counts” offers little reassurance.

I had this obnoxious realization while taking one of many tuk tuks back to my temporary residence at the Young Power in Social Action (YPSA) guesthouse in Chittagong. The last time I was here, it was to implement Recrear Participate last December. Now I have returned alone to catch up with the participants and learn about what has been done. For some time I was just staring out my iron-gated window thinking: “How can there be so many tuk tuks/rickshaws/trucks/people on the road at once?”, “We’re going to crash”, “Is there another way to using a roundabout that I’m not aware of?” I was so feverish in my thinking that I barely realized voicing the next question aloud: “Aren’t they stressed?” Subir, my Bangladeshi colleague, stares at me – clearly not following. I reformulate, “Aren’t they stressed driving in this? (I nod my head towards the traffic) I mean I know if I had to do it even just for a day, I would have a mental breakdown” He shrugged and told me, “They’re used to it. It’s normal, I guess.” That got me brewing on a different tangent: what is normal? This is my fourth time in Bangladesh now and I still come here as an obvious foreigner, alarmed by what I see. Why isn’t anybody else concerned? To me it isn’t normal, but what if it is for people in Bangladesh?

As I remain stuck on this thought I see something else: a tuk tuk that has decided to bypass the traffic by driving on the opposite side of the road. Admittedly, this is not the first time I had seen it but this time I actually took note of it and asked Subir, more deliberately this time, “Is there any recourse to that kind of behaviour?” He expressed that unless it was something major (meaning a big crash or a car flipped over), no one cares. To that I come back with yet another question: “What about the public authority?” What happened next was mildly satirical as a pick up truck with two armed policemen seated in the back are seen cutting traffic in the opposite lane (just like the tuk tuk before), just as Subir finished explaining the omnipresence of rampant corruption here. I half-laughed in disbelief, realizing that the mechanisms for justice were even more elusive than I imagined. I reflected upon my initial question and wondered aloud, “I guess you wouldn’t be stressed if you know no one is going to slap your hand for bad behaviour, because bad behaviour is anything but clearly defined.”.

But it doesn’t just stop at the lack of traffic laws, it’s the inflation-induced high prices, con men disguised as beggars and intolerance for differences in a multiethnic society that make you ask yourself: when is enough enough? The revolution is all around us – and by that I mean the uprising of citizens, often young citizens, who no longer want to tolerate man-made societal injustices. But here in Bangladesh there are but ripples in these revolutionary waters. Subir tells me, not enough has happened to truly anger people into action. The unspoken resolve to that is that we have to wait, wait until Bangladeshis begin to say, “This is not normal.” I’m not sure how long that means but I’m worried that during that wait, the problems will have become too severe, the situation irreversible. Some say we are already there.

So these last few days I have been meeting with five wonderful young Bangladeshis in a cluttered room on the fifth floor of a run-down building. I have to say, amazing things happen in the most unsuspecting of places. For three days we worked together: me showing them how to deliver the Recrear Participate workshop and them bringing a touch of reality to the purpose of each session. The frequent power outages, roaring construction work and scuttling cockroaches did little to deter us. I loved these sessions because at the center of this more-than-a-little overwhelming reality there were these five young individuals who had a different vision for their community. Day after day they believed even more in the notion that a young person really can influence his community. We just don’t see it because it’s not what we expect. We’re not talking revolutionary development policy here. I’m referring to a young person who realizes they have a skill and uses it to the benefit of someone else. Like Tanvir and Shushmita, two law students who thought to record their voices as they read law textbooks and provide those CDs to the illiterate and visually impaired. Doing what they can with what skills they have.

In a country where there seems to be no ideal road to development, the answers may lie in the simple solutions. It will take a change in attitude to see the full effect, and everyone needs to be on board. I think nobody can afford to wait for people to care. We’re a 7 billion world today – it might be time to review what’s normal.